New production of the Wiener Staatsoper

About the staging
Oliver Láng talks to director Vincent Huguet *

The Quality of a Fairy tale

There are works that are so complex and multi-layered that their opulence makes them difficult to fully grasp in one evening. Die Frau ohne Schatttenis one such work. When you started working on this opera, did you deliberately identify one aspect that you wanted to focus on, or did you try to accommodate all the important ways of looking at this work – from fairy tale to psychoanalysis?

Vincent Huguet: I would say doing both is impossible. The story is without doubt complicated, it is rich and fascinating and touches on many topics. Some people say: the music may be lovely, but the plot seems very difficult to understand. The opera is certainly complex and includes many references made by Strauss and Hofmannsthal that are so steeped in the era when the opera was written that we don’t grasp them at first glance. This complexity cannot be reduced to a single aspect. I personally would have considered it a pity if we had put overly narrow constraints on the piece. This opera has so many windows you can look through, each of which lets you discover something new. Apart from that, of course not all aspects can be handled in concrete terms. So we are intentionally leaving room for mystery and richness of association, without necessarily defining everything precisely. And if I succeed in telling the opera in a way that it will be understood, then we shall have achieved a great deal!

In other words, the concept is openness.
Vincent Huguet: I‘m always intrigued when other directors can say: “I have come up with the concept par excellence!” With Die Frau ohne Schatten, I simply don’t believe that is possible. The opera is so intricate that any attempt to establish a single line of thought for it is tantamount to reducing its expressive power. With just one concept idea, just one viewing angle, you cannot do justice to Die Frau ohne Schatten.

The aspect of the fairy tale plays a very special role for you.
Vincent Huguet: Strauss and Hofmannsthal wanted this work, which is the most extraordinary in their entire extraordinary collaboration, to have a fairy tale quality. We now know that there is nothing more fragile than a fairy tale. The moment you explain it, try to pin it down and interpret the symbolism, it loses its magic. Of course, we all know that fairy tales are not just the story that is being told, but have multiple underlying layers, some of which are not at all suitable for children. It is important to know this and address it. But when you are telling a fairy story you should not focus too much on that; instead you must allow the magic to have its effect.

People like to follow the path prepared for us by the authors – the reference to Die Zauberflöte, which according to Hofmannsthal relates to the opera in the same way as Der Rosenkavalierrelates to Nozze di Figaro.
Vincent Huguet: Die Zauberflöte, of course! It is about trials, but I think that Die Frau ohne Schatten delves even deeper, especially where the second couple are concerned, Barak and his Wife. This is not just a cheerful character like Papageno, which derived from popular theatre and has straightforward needs such as eating and drinking. Barak is a much more complex character.

Before we come to the characters: the trial. Is the concept of the trial central to your work?
Vincent Huguet: I think that Strauss and Hofmannsthal ask us questions that touch the core of our being. Are we capable of reforming ourselves – by our own efforts? Can we place the well-being of others above our own well-being? And to what extent can we change, recognizing the complexity of the world and of life? It is about conscious change, not an unconscious maturing over the years. One of the key propositions is: we were not put in this world to live on our own. It is also a warning: remember that it is not just about you. Incidentally, it has a lot to do with fear. Anyone who is afraid does not dare to take even one step in a new, perhaps unknown direction. Change takes courage, because we never know exactly what the consequences will be. So there are two aspects: rejection of selfishness and a step towards the unknown. By the way, the Nurse does not succeed in this, so for her there is no happy ending. The others, in other words the Empress and the Emperor, the Dyer’s Wife and the Dyer, have no fear. We have to bear in mind that parts of the opera were written during the First World War. It was clear that something was going to perish, in a fashion more violent than ever before seen. All Europe was desperate.

Do you find that the fragile war-time situation and the unstable pre-war period are reflected in the opera?
Vincent Huguet: I was amazed at how little Hofmannsthal and Strauss discussed the First World War in their correspondence. If they did, it was rather incidental, but never along the lines of: ‘Yesterday there was another terrible battle where 2,000 people died.’ Why was that? How can it be that two people who see that the world around them is collapsing and there is war on all sides do not talk about it? Then I realized: they didn’t discuss it because Die Frau ohne Schatten is about war, not addressed directly, but in a higher sense. They could not avoid dealing with the war in the opera, because as an artist one is challenged to adopt a position and state an opinion… So what position did they adopt? They said unless people change – not only in their behaviour, but also in the way they deal with love – the cycle of life, of transfer from generation to generation will be interrupted, and there will no longer be any going forward, any continuity. We must change our thinking, jump over our own shadow! No wonder a number of women said at that time that they did not want to bring up children just to send them off to military service …

So for you motherhood in the opera stands very specifically for motherhood in life.
Vincent Huguet: Yes, also. It is a symbol, but also quite directly: motherhood. I am usually a super-feminist in my productions. Roméo et Juliette, Dido and Aeneas: I have staged them from the woman’s perspective. In this case we don’t have to specifically take the position of the woman, it is central in the opera anyway; the three women tell the story. I think that in this opera Hofmannsthal and Strauss took a pre-Feminist standpoint. Surprisingly modern, and when you consider that suffrage for women was introduced in Austria in 1919, the era and the opera are perfectly in sync.

Are questions of role models outlined? Is it only about women and children, or is there a bigger picture here?
Vincent Huguet: You can see a wide variety of role models. Can I be a man without children? A woman? I find it interesting that this is actually the first opera that deals with the crisis of masculinity and virility. Barak and the Emperor are both surrounded by such strong women! I can imagine that Barak for example, even if he doesn‘t show it, may be intimidated by his wife. She expects so much of him. And, let‘s be honest: the Emperor is also not a particularly strong man. He looks like a hero on the outside, but inside he is weak. The opera is also about narcissism, about our relationships with each other, about the balance of power in relationships. And about the question of how we treat each other.

That brings us to the characters. It is obvious why the Empress and the Dyer’s Wife must be tested. But what must Barak learn?
Vincent Huguet: Barak is a fascinating character, very enigmatic. At first I didn‘t particularly like him. I found him a bit one-dimensional, a man who dreams of having a large family and does not see anything else. And that is the crux of the matter. He is not capable of seeing his wife as she is. Regardless of how badly she behaves, he is always appeasing and caring. That can also be a form of control, this eternal evasiveness, of not reacting to someone. You can live with someone for 20 years and not want to see what the other person is like. It’s a form of cowardice – and it kills the relationship. Barak finally understands that. He doesn’t have to be macho, but his wife wants a husband who is strong and does not always equivocate with a smile.

The Nurse is not human – yet she is so incredibly human!
Vincent Huguet: Absolutely. She is human being, even though she is not really one at all. She is similar to those people who believe they belong to a different caste and so reject all others. But the more she opposes people, the more human she becomes. I think she is suffering from something and is trying to protect the Empress and help her. She is like a mother lion who is willing to kill just to help her cub. It’s interesting, because after all she isn’t the Empress’s mother… The entire opera is about mothers, and the only person who behaves like a mother is the Nurse, who doesn‘t want to have children and is punished…

The Dyer’s Wife is not someone who wins people’s hearts from the start. Have you asked the question why she is the way she is? Are you interested in the reason?
Vincent Huguet: I prefer to leave that question open. If you specify any particular possibility – sexual frustration or a petty dream of a rich man – it has a restrictive effect. She is someone who would like things to be different, she is ambitious. But the problem is that all she does is demand this better life, she actually does nothing to procure it. On the other hand, she keeps giving Barak new opportunities – that is less noticeable in the libretto than in the music.

Keikobad: How concrete is your vision of him? What is his motivation? Vincent Huguet: I see a reference to Nietzsche, his writings on God, who is dead or at least is invisible. His only function is to generate fear. This Keikobad reminds me of Dino Buzzatti’s tale Il colombre. In it, he tells the story of an ominous sea monster that a man is afraid of; in the end the man finds out that he himself was the monster that caused him to be frightened. For this reason, in Act 3 I put the Empress in front of the black curtain, because at that moment she finds herself. How often do we ask the question, regardless of whether Keikobad exists or not: did I conduct myself well? Did I accomplish what I am supposed to accomplish?

For you, the opera poses questions not only about personal guilt, but also about the future.
Vincent Huguet: Actually, it is disturbing that we have once again reached a point identical to the way things were at the time of the world première of the opera! People must learn to change their attitude to the world and each other. This time, for us in Europe it is not war that we are looking at, but on the ecological level: if we do not radically change our thinking and our behaviour today, the generations after us will no longer find an earth where people can live.

* interview published in the program of Die Frau ohne Schatten edited by the Wiener Staatsoper in May 2019. 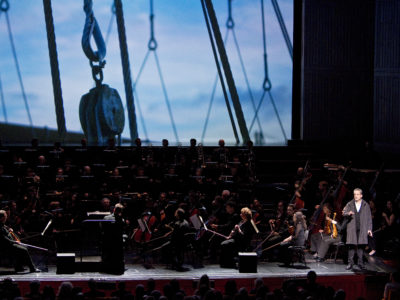 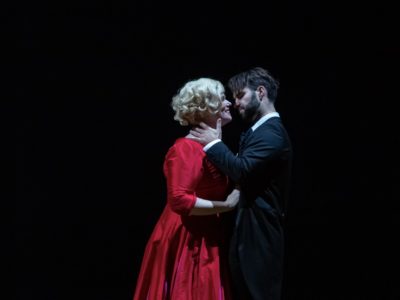 Next Project (n) The Tales of Hoffmann